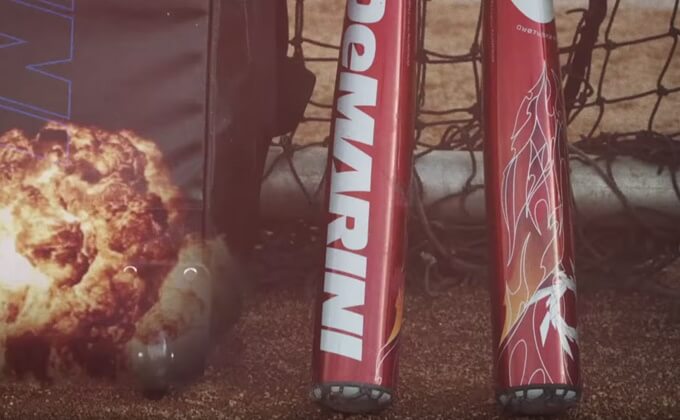 DeMarini has repeatedly shown its ability to produce innovative and technologically efficient bats that stun competitors and consumers alike.

The company, under the command of Ray DeMarini, quickly garnered attention when they released the first multi-wall bat on the market.

This industry-leading design rocked the bat manufacturing world as competing companies began utilizing this same technology in their own bats.

Since then, DeMarini sticks have never disappointed at making batting experts salivate. Each bat is crafted with an exact type of hitter in mind; from the balanced Vexxum to the more end loaded Voodoo, DeMarini covers all the bases when it comes to hitting preferences.

The DeMarini Voodoo Overlord FT is perhaps the most explosive bat of the year’s lineup. It is actually slightly more end loaded than the normal DeMarini Voodoo sticks, which has made it a favorite amongst cleanup hitters everywhere.

It is available in different version to fit with BBCOR, youth and senior league standards and all DeMarini bats are covered by a one-year manufacturer warranty.

To achieve its status as the cleanup hitter of the DeMarini lineup, the Voodoo Overlord FT combines the X12 Alloy with a slightly heavier end load.

The X12 Alloy is improved compared to the bat’s 2014 version, which used an X10 Alloy, and has a superior maximum trampoline effect on batted balls. The end load weight only adds to this impressive amount of power and pop.

However, the heavier than average end load of the DeMarini Voodoo Overlord FT requires a true power hitter to use efficiently — a player that has raw power and strength.

The connection point between the Voodoo Overlord’s barrel and the D-Fusion FT handle undergoes a flame tempering treatment (hence the FT in the name of the bat and D-Fusion handle).

This process bonds the two pieces together for an unmatched stiffness that grants the hitter superior control over their swing.

In addition, the melding between the barrel and handle helps reduce vibrations upon ball contact to such a degree that the unpleasant feedback is nearly undetectable in the hitter’s hands.

Although it may seem like the bat is eliminating the vibrations caused by making contact, the DeMarini Voodoo Overlord FT is actually redirecting the energy to the barrel of the bat.

In order to achieve this feat, the D-Fusion FT handle and the bat’s ION V End Cap work in cooperation with one another.

As the bat makes contact with a ball, shockwaves ripple up to the end cap and down to the handle.

The ION V End Cap and D-Fusion FT handle transform these shockwaves into energy and redirect that energy to the sweet spot of the bat.

The result is the extremely explosive potential of the DeMarini Voodoo Overlord.

For improved feel, the bat’s RCI Knob is sculpted to fit the natural form of the bottom of the hitter’s hands.

Thus, even after several swings and no batting gloves, the DeMarini Voodoo Overlord FT will not cause calluses on a player’s hands or fingers.

It is also noteworthy that DeMarini has an online bat customizer, which gives the consumer complete control over their stick’s appearance, including the color scheme and personalized touches, such as the name or decal on the barrel and knob.

Even if you are not interested in a DeMarini product, it is a fun tool to build a custom-looking bat.

The BBCOR version of the Voodoo Overlord has a drop weight of -3 and a 2.625-inch barrel diameter (as required for BBCOR certification).

Compared to similar BBCOR bats, the Voodoo Overlord FT has a superior drop weight and its high-quality design and engineering delivers absolutely explosive power that every long-ball hitter will enjoy.

It is a seriously worthy bat for the high school and collegiate levels of play.

The proof of the DeMarini Voodoo Overlord FT BBCOR’s ability is in its popularity amongst NCAA Division-1 players.

The DeMarini Voodoo product line is the most commonly used bat at this level of play. D-1 players are some of the most disciplined and expert hitters available.

Thus, they possess a keen eye for quality sticks and use the Voodoo as their weapon of choice.

Baseball analysts have reasoned that no other BBCOR bat has been more adept at assisting teams to the NCAA tournament than the DeMarini Voodoo.

These differing length-to-weight ratios allow the senior league version of the Voodoo Overlord FT to cater to the needs of all different sized players.

Even a contact hitter who prefers a balanced swing weight could take advantage of the -9 or -10 sizes and have an extremely fiery bat.

This youth league bat has a -13 length-to-weight rating and a 2.25-inch barrel diameter. The youth-sized DeMarini Voodoo Overlord FT is approved for play in Little League, Babe Ruth, USSSA and other prominent organized leagues.

It is comparable to some of the top youth league bats, such as the Easton S1. Youth players especially enjoy the nearly nonexistent bat sting.

Without a doubt, the DeMarini Voodoo Overlord FT is a hyper-competitive bat at all levels. High school, collegiate, senior and youth players alike can benefit from the monstrous power of this alloy bat.

Its impressive flame tempered handle offers a stiff feel and works with the ION V End Cap to redirect vibration towards the barrel of the bat.

Not only does this add pop to every batted ball, but also it means the hitter feels little to no feedback in the hands.

While the DeMarini Voodoo Overlord FT has a higher than average price point, it is easily one of the most technologically advanced bats on the market, which may be the reason the Voodoo lineup is the most popular of Division 1 athletes.

At the senior and youth leagues, it is understandable that spending the extra money on the Voodoo Overlord might be out of budget; however, the results will speak for themselves if you are willing to spend the extra dollar.