Louisville Slugger’s baseball bats are some of the most recognized and popular in the world. While the company is primarily recognized for their wooden sticks, they make several impressive lines of aluminum alloy bats for softball, slow-pitch, high school, college and many other levels of play.

Louisville Slugger (LS) has taken what they have learned from years in the business and applied it to their aluminum products to give them a solid feel during contact that is reminiscent of a wooden baseball bat.

This year, Louisville has added the Z4000 to its offering of aluminum bats. It is the successor of 2015’s Z3000 series, which received positive consumer feedback.

LS tried to enhance the small drawbacks of the 2015 model to create a more refined and complete aluminum bat in the Z4000.

It is designed for slow-pitch softball and is available in balanced, end load and power load versions that are approved for play by the Amateur Softball Association (ASA) and United States Specialty Sports Association (USSSA).

The Z4000 is a three-piece bat, just like its previous versions. Some hitters prefer this composite construction because they believe it allows the bat, despite being made from aluminum, to bend at high swing speeds.

While both feel differently, especially upon contact, the choice between a composite or a one-piece bat boils down to the hitter’s preference. The three parts of this composite bat include the barrel, handle and rubber insert.

The width of the barrel is 2.25 inches, but its weight depends on the chosen model (balanced, end load and power load in order from lightest to heaviest).

Its length, no matter what version you choose, is always 12 inches and the aluminum alloy gives the ball the pop hitters look for during contact.

This foot-long barrel generates a large sweet spot that is easy to find every time at the plate.

While many bats have a gloss finish to them, the Z4000’s barrel has a Grit Blast Finish. This rough texturing allegedly increases backspin for farther hits.

The handle is 7/8 inches and tapers down to the knob. Its synthetic rubber grip keeps players hands from sliding during a swing.

When contact is made, the vibrations caused are designed to die down before they reach the bat handle or the hitter’s hands. This means fewer hits will cause painful ringing in the hands.

Part of this vibration reduction is thanks to the final piece of the Louisville Slugger Z4000 – the Tru3 rubber insert.

The Tru3 is an innovative power transfer feature. It inserts at the point of connection between the bat’s handle and barrel.

Not only does this provide a secure seal and connection between all three parts of the bat, but the Tru3 rubber insert also offers a firmer feel upon contact, which is how it helps reduce vibrations in the hand.

The Tru3 insert was first introduced in Louisville Slugger’s Z3000 and was highly praised and approved by consumers.

The Z4000’s rubber connective piece is tighter, when compared to its predecessor, which offers a sturdier swing and improved durability.

This version of the Z4000 is approved for play in USSSA, NSA and ISF leagues, but not ASA games.

Its 2.25-inch barrel and balanced weight means it is ideal for a hitter looking for a quick-swinging bat, especially someone who does not feel the need, or is not enough of a power hitter, to take advantage of the end load and power load versions of this product. Either way, it generates ample power and exceptional bat speed. 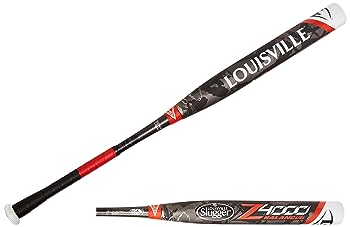 Its 2015 predecessor was one of the most popular in this line and there is no reason to expect that the Z4000 USSSA Balanced will not continue that trend. It is only available in red.

The Louisville Slugger Slow Pitch Z-4000 USSSA Balanced Bat is a power hitter’s dream. The end of this bat is weighted (as opposed to being balanced throughout) which hampers your bat speed, but delivers exceptionally strong power at the moment of inertia.

This allows you to swat balls farther and deeper for more long drives and homeruns. If you can comfortably swing this bat, despite the extra weight in the barrel, it is an excellent choice, especially for someone willing to spend a little extra to noticeably improve their power hitting.

Similar to the above, this bat is only approved for play in USSSA, NSA and ISF leagues and does not carry the ASA’s stamp.

If the End Load Z4000 does not have the power hitter in you itching to take some batting practice, then perhaps you are more suited for the 1.5-ounce end load of the Z4000 Power Load.

The super aggressive swing weight of this bat is for serious power hitters only. It is not a bat for someone looking to establish more power hitting; it is designed for those who already excel at hitting homeruns and want to drive them even further.

It is not approved for ASA play, only USSSA, NSA and ISF leagues. It is also important to note that this is the first year Louisville Slugger is offering a power load, slow-pitch bat in this series.

It may be wise to wait and see how other hitters like it before shelling out money on an product that is not consumer-tested yet. It may even be best to wait until 2017 and see what improves are made to this stick before purchasing.

The USSSA-approved Z-4 17 USSSA bats, in balanced or end load versions, do not differ from their USSSA counterparts.

The only discernible differences are their colors and other slight aesthetic disparities. However, these two models are the only ones with the USSSA’s stamp. They can also be used in USSA leagues.

Obviously, they are ideal for hitters playing in an ASA league. The ASA balanced bat is orange and the end load version is yellow.