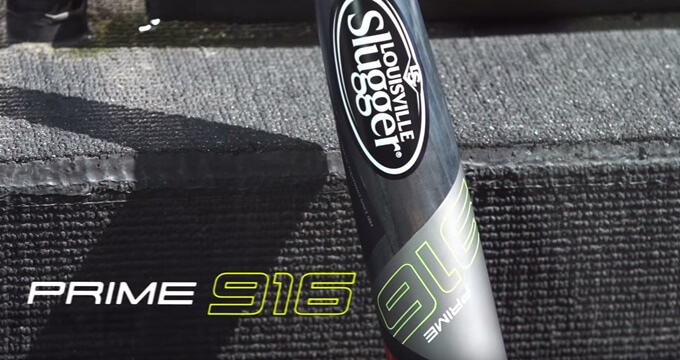 The symbol of a Louisville Slugger is as synonymous with baseball as any other object or even person.

The company has been around for over a century; they have been in the game of making baseball bats since the late 1800’s. No one has been doing it as good as Louisville Slugger for as long as they have.

Thus, there is no one with the same level of experience and age old know-how.

While we often think of Louisville Slugger in terms of their classic wooden bats, the company has expansive experience designing, improving and innovating new alloy and metallic bats, as well.

The motivation behind each of Louisville Slugger’s BBCOR, Senior League and Youth alloy bats is building confidence.

Their bats, including the 2016 Louisville Slugger Prime 916, are designed to intimidate the opposing team and allow a hitter to bring an air of certainty to the plate.

By focusing on these three ingredients, the Prime 916 achieves one of the best swing weight and sweet spot ratios on the market.

The sweet spot itself is enormous and only seems to get bigger, when you look at the other performance-enhancing features of this stick.

This material is designed to fulfill all three of the Prime 916’s goals.

It helps improve the bat’s trampoline effect on batted balls (power), is ultra-lightweight (bat speed) and is carefully sculpted to carry a uniform weight throughout the bat (balance).

Also adding a little oomph to the 2016 Louisville Slugger Prime 916 is the TRU3 Explosive Power tech.

This has been featured on other LS-brand bats and actually makes the bat a three-piece stick, instead of a traditional one or two-piece.

The TRU3 technology works by placing a rubberized insert at the connection point between handle and barrel.

Upon contact with a ball, this helps enhance the bat’s ability to transfer energy into the barrel, where it is needed most.

Sometimes these shockwaves can cause painful bat sting on the hitter’s hands, but not with the Prime 916.

Each of these bats also includes a Lizard Skins Grip, which adds another layer of protection against bat sting, while also improving tackiness and thereby the hitter’s grip on the handle.

This is important towards preventing the player’s hands from drifting during the swing, especially when you consider the tremendous bat speed of the Prime 916.

The 2016 Louisville Slugger Prime 916 baseball bat is available in 8 different variations; there are three Youth and four Senior League models, of varying sizes and weights, and a BBCOR version.

Each has all of the features listed above. Their differences and modifications will be discussed below.

The BBCOR model of the Prime 916 has one added feature that any high school or college baseball hitter is going to love.

In order to optimize the bat’s performance under BBCOR standards, the engineers at Louisville Slugger inserted a 1-inch composite disc, just at the base of the barrel’s sweet spot.

This allows the BBCOR Prime 916 to have the absolute thinnest barrel walls possible. Not only do these thin walls promote a lighter feel to the bat, but also expands the sweet spot even more and creates maximum trampoline effect on batted balls.

Thus, the BBCOR version of the Prime 916 even further delivers on the promised power, bat speed and balanced qualities.

It is also worth mentioning that the 2016 Louisville Slugger Prime 916 is one of the most popular bats among the top 25 NCAA teams.

It continues to brush elbows with the likes of the Easton MAKO and other top-performance bats.

For Senior League players, Louisville Slugger has four different offerings of the Prime 916, which means there should be a style to fit most players’ preferences.

This is important to keep in mind, as choosing a bat that is too heavy will drastically diminish your ability to take advantage of the supreme bat speed offered by the 916.

All of these Senior League bats have a barrel diameter of 2.625 inches; however, the drop -10 has two variations, including one with a slightly larger barrel, at 2.75 inches.

In addition, each bat carries the USSSA 1.15 BPF certification stamp, which clears it for play in USSSA leagues and some other major associations, including Travel Ball leagues.

As mentioned above, the goal of Louisville Slugger’s metal alloy bat designs is building confidence and there is no league where confidence is more important than at the youth level.

Confidence in a young player could be the difference between them sticking with the game and signing up season after season, or hanging up their glove and cleats.

The 2016 Louisville Slugger Prime 916 Youth Baseball Bat could be that extra nudge towards the first option.

Again, the -10 drop weight is going to be the heaviest of these sticks, so choose a weight appropriate to your child’s size and capabilities.

If you are unsure, always visit a local batting cage or pro shop and see if they have test models for your son or daughter to try.

Overall, the 2016 Louisville Slugger Prime 916 delivers on all of its promises. It is definitely balanced, explosively powerful and rips through the strike zone.

The Prime 916 has noticeable improvements over last year’s Prime 915, which is allowing it to receive the recognition it deserves, by top NCAA athletes.

It has no problem rubbing elbows with the high-end likes of the Easton MAKO or DeMarini CF8. Not to mention, it is a few dollars cheaper.

Louisville Slugger is, in fact, so happy with this year’s Prime 916 bat that they offer a 30-day Performance Promise.

If you do not think the 2016 Prime 916 matches up to your current favorite bat or you just do not like it, then you can return it for the full retail price.

There’s nothing to lose and confidence, power, balance and bat speed to gain!