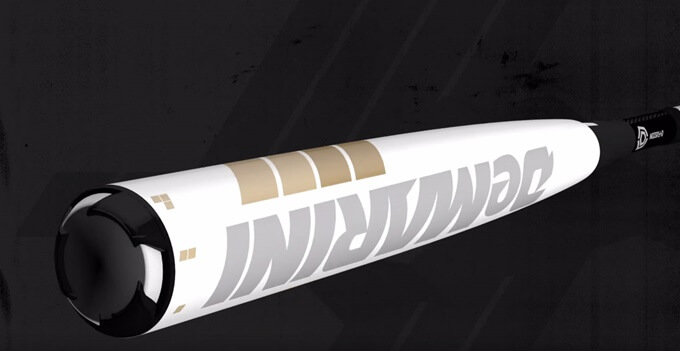 Streaking onto the scene in the mid 90’s with their double wall bat design, DeMarini continued to be a rising star amongst bat manufacturers for years.

Today, they are one of the top choices in premier leagues across the globe. By improving and building upon their existing features, DeMarini pushes the envelope on their bats year after year.

At every new release, hitting enthusiasts at all levels of play eagerly await their newest innovations and designs.

The release of the DeMarini CF8 bat was no different. Although little noticeably changed since its 2015 model, aside from the bat’s barrel length, if you lift up the hood of the CF8, you will see exactly why DeMarini has remained a premier bat manufacturer.

Instead of reinventing the wheel, DeMarini has made a namesake on simply improving already existing features, which is exactly what they have done with this CF-series baseball bat.

Compared to its CF7 predecessor, this new model has an elongated barrel size, which improves the size of the bat’s sweet spot and gives the CF8 the best sweet spot to swing speed ratio of any stick in this series’ past.

Another upgrade lies in the CF8’s handle; its earlier model had the D-Fusion FT Handle, which has upgraded to the D-Fusion 2.0.

While this is mostly the same flame-tempered handle as before, the D-Fusion 2.0 boasts even more bat sting reduction than before. Plus, it helps redirect that energy into batted balls.

The DeMarini CF8’s Paradox +Plus Composite material is also an improvement over previous years and allows this stick to achieve optimal ball pop.

These highly engineered and calibrated carbon fibers work in tandem with the longer barrel profile to deliver an overall massive power zone.

Despite the longer barrel, the Paradox +Plus material maintains the light and speedy swing that has come to be expected from the DeMarini’s CF-series.

Other supportive features on the CF8 include the RCI Knob and Low Pro End Cap. The knob is featured on most DeMarini bats (and has been for some time).

While it does not enhance the player’s performance in any way, it does improve their comfort when swinging the bat because it is curved to fit the form of the bottom of the hitter’s hands.

The Low Pro End Cap optimizes weight dispersion and compression in the barrel, which helps improve the feel when making contact with the ball.

When it comes down to aesthetics, no one does it quite like DeMarini. They offer an online customization tool that allows the buyer to choose the color scheme, decals and other small details of the bat’s appearance.

While this increases the already high price point, it is a neat option that no other manufacturer offers to the same degree.

In addition to improving the overall performance and functionality of the CF8, DeMarini also decided to expand their offerings.

Thus, this stick is available in a variety of models that meet a wide range of league regulations regarding barrel size, length to weight ratio, etc.

Abiding by the -3 length to weight ratio and 2.625-inch barrel diameter mandated by high school and collegiate rules, the BBCOR model of the DeMarini CF8 is still a powerful stick in the hands of a contact hitter.

With the fast swing speed and expansive sweet zone, you will be driving balls past infielders in no time.

It is worth mentioning that amongst Division 1 NCAA athletes, DeMarini is the favorite when it comes to bat makers.

The drop -10 bat even has two versions – one that is end-loaded and another with a balanced swing weight.

Thus, the DeMarini CF8 fast-pitch softball bat handles the styles of both contact and power hitters.

There is even a “slapper” fast-pitch softball CF8 that is designed for lefty slap hitters who frequently are bunting to get on base.

The senior league DeMarini CF Zen Balanced is also available in three different drop weights (-10, -5 and -8). It is important to point out, in particular, that the -10 model is available with either a 2.625 or 2.75-inch barrel diameter.

The majority of senior league bats have a barrel diameter of 2.625 inches and the larger barrel diameter may not be legal under some associations’ rules, so be sure to check your rules, or with a league official, before purchasing.

Despite the youth-level of play that these bats are suited for, DeMarini did not skip on the features.

These sticks still use all of the same high-quality bat technologies and materials as the adult models.

The Junior Big Barrel bat is not recommended (or intended) for fast pitch or kid pitch play. The larger, stretched barrel means it is more likely to dent under heavy play.

Junior Big Barrel bats are typically reserved for tee-ball or soft toss. The youth model will hold its integrity in kid pitch leagues.