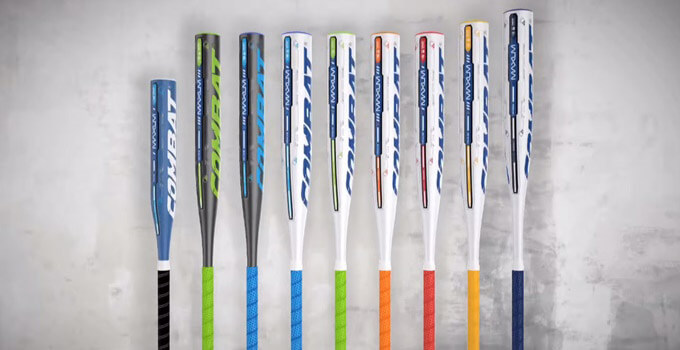 With an impressive history crafting and improving advanced composite technologies, it is safe to say that Combat was helping to enhance athletes’ performance before they even emerged on the baseball and softball bat scene.

They started manufacturing composite softball bats in 2004 and swiftly became a force to be reckoned with.

Soon after storming onto the softball bat scene, they moved to manufacturing composite baseball bats and found equal success.

They continue to be one of the fastest growing brands of softball and baseball bats in the industry.

Part of what makes Combat Sports Group’s products so successful is that many of their innovators and lead designers are past players and fans of the game.

Thus, the origin of Combat’s motto: “For players, by players.” It is through this mentality that Combat is able to understand the needs of players and create performance-enhancing technologies to meet those desires.

Before its unveiling, the Combat engineers were already boasting the Maxum’s prowess. “Something big,” they said. They were not kidding.

The Combat Maxum is changing the way that softball and baseball hitters feel about composite bats. It merges a super light swing with an absolutely gargantuan sweet spot.

Many bat manufacturers claim to have an expansive power zone, but the Maxum is 20-40% larger than competing bats, which is a claim only Combat can make.

The innovators at Combat have also created a new process to forging their bats. Traditional composite sticks are made by continuously rolling and layering material on top of one another.

The Maxum, on the other hand, uses Combat’s Precision Molding Technology (PMT). This process uses superior-quality, carbon-material sleeves and then injects a specialized resin liquid into the sleeves.

The end result of this method is that the bat has none of the seams or blemishes, which the traditional, layering process can sometimes cause.

This process not only improves the performance, as there are no weak points in the bat, which can reduce the flow of energy upon contact, but it also improves the overall lifetime of the bat.

In fact, Combat backs their PMT so much that they include a 500-day manufacturer’s warranty (not to mention, a 30-day money-back guarantee also).

If you are looking for a bat that is certain to last for this entire season and the next, then there are few options better than the Combat Maxum.

The other great part about the Combat Maxum series is that it is available in some many variations and sizes. Across both softball and baseball, the Maxum has 24(!) different variations (which does not include the many different sizes within those models).

Each bat suits the needs of different leagues and hitting styles. Some of these variations are one-piece, while others are two-piece sticks.

In other cases, they offer a balanced model and an end loaded copy, in order to suit the needs of both power and contact hitters.

The single wall version of the Combat Maxum offers a slightly stiffer feel, which is helped by its one-piece design. This solid construction allows the hitter to feel every ounce of contact.

While this does present a small drawback, in that it amplifies bat sting, the handle is wrapped with a Lizard Skins Grip, which helps dampen this potential unpleasant feedback.

Many contemporary, composite bats feature a double-wall design because it helps increase the bat’s trampoline effect. However, some hitters simply prefer the feel and sound of a solitary wall.

This model of the Combat Maxum has a barrel diameter of 2.25 inches and is available with a length-to-weight ratio of -10 or -12.

Choosing between a one-piece or two-piece bat is one of the many aspects of picking a bat that lies mostly upon the hitter’s preference. There are no inherent advantages to picking one style over the next.

Some hitters simply prefer the stiffer feeling of a solid construction bat, while others like the feeling and performance of two piece bats.

Luckily, when it comes to the Combat Maxum Fast-Pitch Softball Bats, both styles are represented equally.

The one-piece, fast-pitch softball bat has a 2.25-inch barrel diameter and is approved for most major softball league associations, including ASA, USSSA and ISA.

There is not much different between the single and double-piece fastpitch softball bats. Both are available in the same four length-to-weight ratios (-10) and have a barrel diameter of 2.25 inches.

The one difference is that the two-piece bat features Handle Isolation Technology, which further reduces vibrations felt in the hands and then has “store and release” power.

The youth baseball bat model of the Combat Maxum comes in either a drop 10 or drop 12. Both, however, are ultra-lightweight and feature some of the lightest swing weights available on a youth bat.

Thus, this stick is perfect for youth players of all ages who want a speedy bat capable of driving the ball. Plus, the Maxum’s large sweet spot means that your son or daughter will quickly build confidence at the plate, as more hits will be in that power zone.

It is approved for play in Little League Baseball, Dixie, Pony, Babe Ruth and other popular youth league associations.

When it comes to Senior League, slow-pitch softball, the Maxum’s unrestrained sweet spot means you can sit back on that perfect toss and crush it every time.

A welcomed benefit of this stick is that it is available as either a balanced bat or an end-loaded one, which means it appeases both balanced and power hitters.

This bat carries the 1.21 BPF standard, which permits it for play in most Senior League softball associations.

Every Senior League Soft-Pitch Combat Maxum Softball Bat is 34 inches in length and comes in a -6, -7 or an -8 length-to-weight ratio.

This two-piece variation of the Combat Maxum has the same barrel dimensions (13.5-inch length, 2.25-inch diameter) as the above, Senior League bat. However, it is approved for play in USSSA, NSA, ISF and ISA league associations.

It also has the Handle Isolation Technology (HIT), which, as aforementioned, helps limit vibrations felt in the handle and is designed to store and then release energy at the moment of contact.

The result of the HIT innovation is that balls explode off that bat and have a great potential to drive through the infield for base hits.

At the high school and college levels, the Combat Maxum’s huge sweet zone and massive warranty makes it ideal for any top-level player that is looking for bat that is both durable and performance enhancing.

As a BBCOR bat, this Maxum model has a -3 length-to-weight ratio and a 2.625-inch barrel diameter. 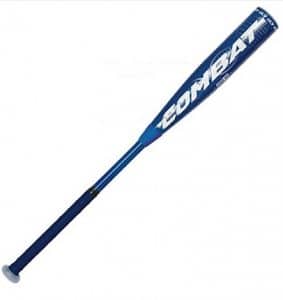 Nhttp://amzn.to/2xbPC1Motable, however, is that it has one of the lowest possible swing weights allowed for a BBCOR bat, which makes it absolutely perfect for a speedy contact hitter looking to flash through that strike zone and make their way around the diamond.

Aside from all of the technologies and perks that come with owing a Combat Maxum bat, the Senior League Baseball Bats have the added benefit of being available in several different sizes and weights.

These bats carry the USSSA 1.15 BPF stamp, clearing it for play in the major Senior League associations.

Casey Rogowski was a successful minor league baseball player and a long-time member of the Combat organization. The Combat Maxum features a special slow-pitch softball bat in his honor.

The bat is unlike the other Maxum models because it has vibrant, urban-inspired graphics, which give any player a little added flair at the plate. It is available in two colors: orange and blue.

The blue Team Combat Casey Rogowski Bat is designed specifically for USSSA and other associations and is fine-tuned to hit the softballs used in those leagues.

The orange variation, on the other hand, is crafted just for ASA and is dialed in for the lower compression softballs used in ASA play.

Both bats have a 13.5-inch barrel length and 2.25-inch diameter and carry all of the typical Maxum perks.

While most of the Maxum models have a balanced swing weight, Combat did not forget about the power hitters’ desired end load.

The USSSA-approved Combat Maxum GUILT has the heaviest end load of any of these slow-pitch bats. 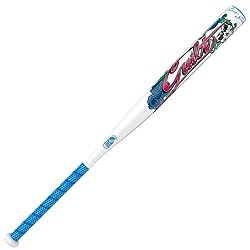 To achieve this weighty, powerful bat, the engineers at Combat managed to reallocate some of the bats weight into the end of the barrel.

Aside from its end load, the GUILT is also noteworthy because it has a uniquely stiffer taper, which helps improve the bat’s ability to transfer energy into a softball more efficiently.

It has four different sizes, each with a different length-to-weight ratio, which helps fit a wider range of hitters.

Overall, the Combat Maxum has a lot going for it in many different areas. First of all, it is reasonably priced, especially compared to other top-level baseball and softball bats.

However, these competitors cannot compete with Combat’s 500-day manufacturer’s warranty.

Therefore, it is not only reasonably priced, but also you know it is guaranteed to last you at least two seasons worth of play.

From a performance point of view, the Combat Maxum also hits high marks. It has up to 40% more hitting surface than competing bats, which increases your chances to catch that ball on the sweet spot of the Maxum and drive for a base hit or more.

Plus, many variations feature an extremely low swing weight that helps cut through the strike zone even faster.

Lastly, the Combat Maxum is available in so many different variations that it does not matter what league you are in, the type of hitter you are or whether you are playing baseball or softball; there is a Maxum available to fit your unique wants and needs.

While Combat may be relatively new to the baseball and softball scene, especially compared to some of the giants like Louisville Slugger or Easton, there is little doubt that they will continue to innovate and astound hitters in the coming years with future technologies and bats.